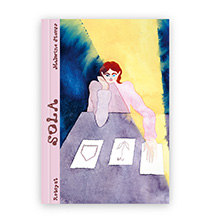 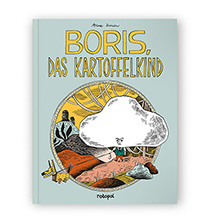 At the eastern edge of the world, there lives a dog-headed giant of indescribable power, more animal than man. And because he’s so powerful, he starts to wonder: Is there no one who is more powerful than me? Reprobus goes on a journey that will change him forever and will take him to an emperor, the devil and a hermit, and will make him a traveler among worlds.
Reprobus means “the rejected” and his story is an ancient legend that is still alive today. His search for the most powerful ruler of the world first appeared in Eastern stories and exerted a lasting fascination on the Western world of thought, which was reflected over centuries in numerous stories and the visual arts, and in a Christian variant that founded the legend of Saint Christopher. In his debut comic, Markus Färber tells his version of this story through powerful images.

(This extract shows a selection of pages of the book.)