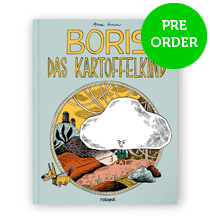 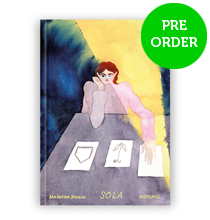 IT HAD TO BE YOU

Are you having a bad day? Well, Ob’s is probably worse. The round-headed and very unfortunate hero of Nick Edwards’ comic IT HAD TO BE YOU, can hardly set a foot outside his door without stumbling into car crashes or being ridiculed by his unsympathetic companion Eck. Ob and his friends live in a fantastic yet strangely familiar city that is scattered over an island landscape. Everything is round, squishy and cute, from the houses to the cars and sea animals. But do not be fooled by appearances. Unlike much of Edwards’s previous work, IT HAD TO BE YOU is not suitable for children. Beneath its soft surface lies a dark and witty satire of modern life. Yes, technology may have advanced, leading to such curious devices as toilets with integrated stool analysis computers. But the characters of Ob’s world have about as much empathy for one another as a bulldozer for an overturned tree. It’s dark comedy at its best.